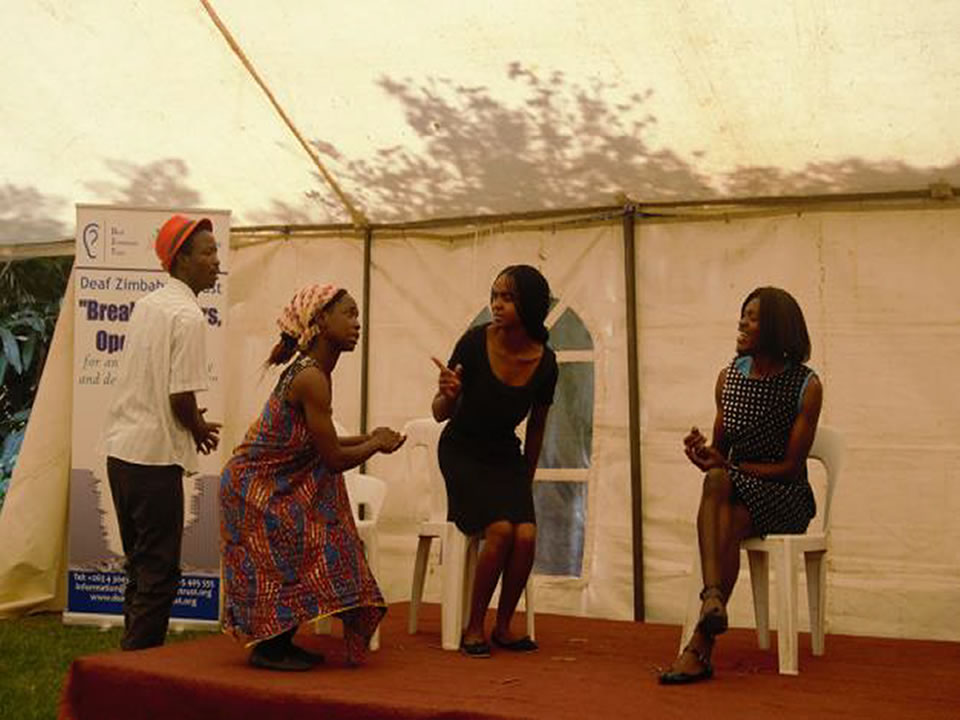 On the 5th of October, Deaf Zimbabwe Trust (DZT) hosted the International Week of the Deaf under the theme Full Inclusion in Sign Language. The commemoration was a colourful event with dramas, songs and speeches performed by the Deaf in Sign language.
Deaf students performed dramas to raise awareness on the importance of Sign Language in promoting inclusion.

Tonderai Makora aka Tony Dee a student at DZT reduced the audience to tears of laughter with his tactics. Dressed in a black and white dotted mini dress, a female wig and shoes he had borrowed from a female friend, one could have mistaken him for a woman. One look at his costume as he walked on stage swinging his “hips” and trying to mimic Barbra Nyangairi sent the audience roaring with laughter.

I feared our guests were going to crack their ribs. I caught a glimpse at Barbra Nyangairi DZT Executive Director and the organizer of the event laughing unbelievable at the young man’s charms. As he femininely swept his wig and signed, “I am Barbra” the crowd nearly collapsed with laughter.

I asked him how he transformed himself into a woman. He laughed and told me that he had always had the passion to be an actor. “My friends at school nicknamed me Gringo because I like to joke around. Even in class I am the most hilarious student and I often get in trouble with my teachers.

I really love comedy and I enjoy making people laugh. Comedy in sign- language is very easy as there are a lot of actions involved that makes it enjoyable and fun to watch. At one point I thought of leaving school to become a full time comedian like Gringo. But the film industry is not supportive when it comes to Deaf actors. I am now concentrating on my studies and hope to have a better job and life in the future.”

“I hate it when everyone is all serious. Cracking a joke now and then helps me release tension around me and it also boosts my confidence”, said Tony Dee. He said he also writes songs and hopes to release an album one day if given a chance. In addition to this, Tonderai also places soccer.

I asked him if he does his comedian tricks on the soccer fields. He laughed and said, “No ways. That is the only place I am serious because I need to concentrate. But off the field my friends will be running away from me like a plague for fear of dying of laughter.”

Other Topics in this bulletin